Martin Kleppmann from the University of Cambridge has given very nice introductory lectures about formal verification with Isabelle: the title is Correctness proofs of distributed systems with Isabelle, see these slides. Further information and video recordings are available from here:

The lecture motivates the use of Isabelle by the very fitting characterization by Dominic Mulligan: Isabelle is the world’s most complicated video game.

Later in the talk there is a hands-on demo of the Isabelle Prover IDE, using the standard Isabelle/jEdit front-end: this is not a classic “REPL”, but a semantic document editor with immediate feedback by the prover. 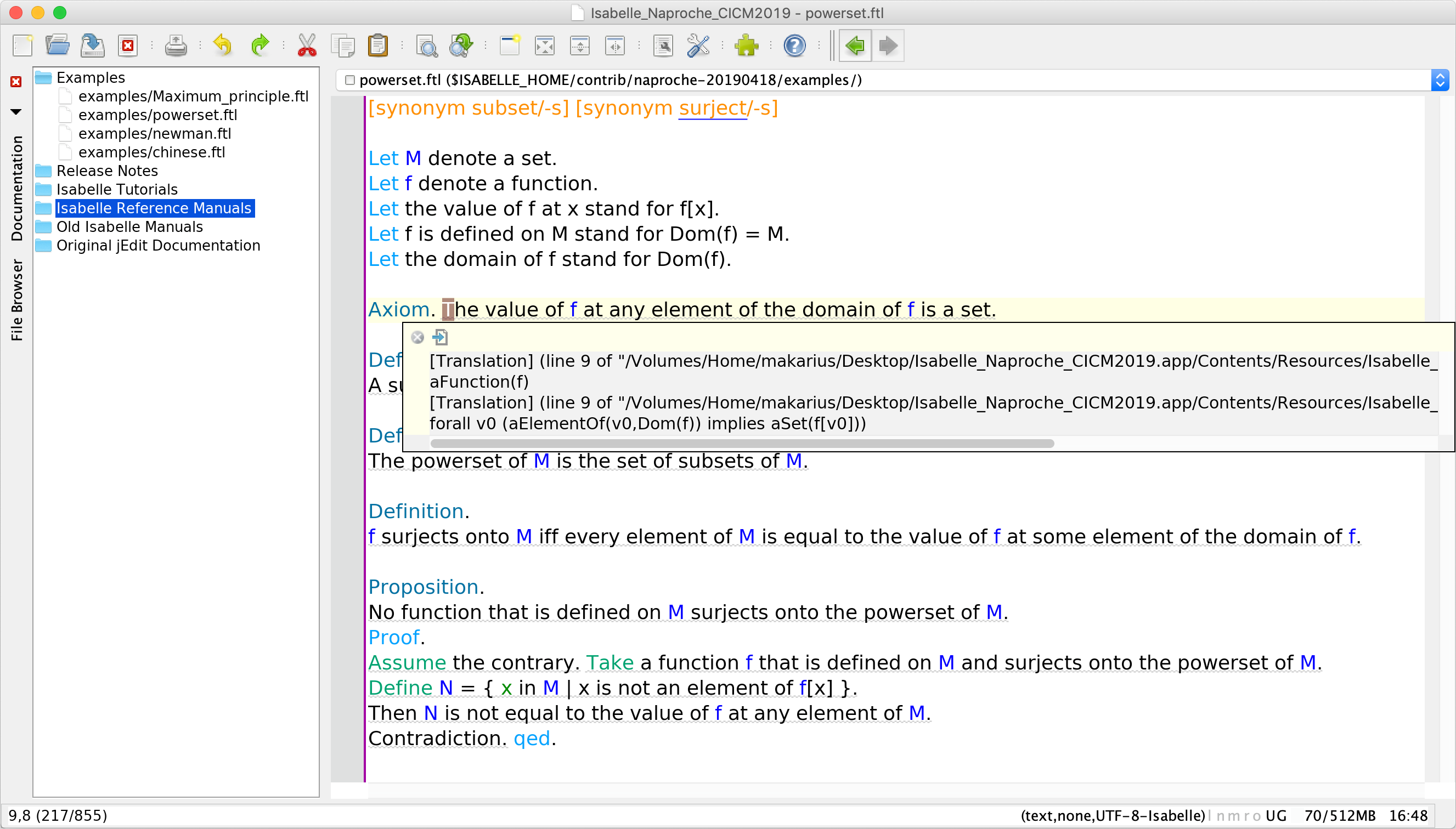 During the two weeks of 17..28-Jun-2019, I will be visiting Deducteam at LSV, Paris/Cachan. There will be two presentations about Isabelle technology for formal documents and libraries:

At the Conference for Intelligent Computer Mathematics (CICM 2019) in Prague (08..12-Jul-2019), I will give a keynote presentation on the track Mathematical Knowledge Management (MKM).

Title:
Interaction with Formal Mathematical Documents in Isabelle/PIDE
Abstract:
Isabelle/PIDE has emerged over more than 10 years as the standard Prover IDE for interactive theorem proving in Isabelle. The well-established Archive of Formal Proofs (AFP) testifies the success of such applications of formalized mathematics in Isabelle/HOL. More recently, the scope of PIDE has widened towards languages that are not connected to logic and proof in Isabelle, but taken from a broader repertoire of mathematics on the computer. The present paper provides a general overview of the PIDE project and its underlying document model, with built-in parallel evaluation and asynchronous interaction. There is also some discussion of original aims and approaches, successes and failures, later changes to the plan, and ideas for the future.
Paper:
Preprint from ArXiv

This can be avoided by downgrading to linux-image-4.15.0-34-generic or by using the following temporary workaround for Isabelle2018.

At the Dagstuhl-Seminar 18341 Formalization of Mathematics in Type Theory (19..24-Aug-2018), I delivered a talk on The Isabelle Prover IDE after 10 years of development.

The main ideas around Isabelle/PIDE go back to summer 2008. This is an overview of what has been achieved in the past 10 years, with some prospects for the future. Where can we go from here as Isabelle community? (E.g. towards alternative front-ends like Visual Studio Code; remote prover sessions “in the cloud”; support for collaborative editing of large formal libraries.) Where can we go as greater ITP community (Lean, Coq, HOL family)?

In the discussion after the talk, there was a very fitting reference to the website of Bret Victor, “perveyor of impossible dreams”.

Here is the video for my presentation at Curry Club Augsburg (09-Aug-2018) about Isabelle/VSCode and the Language Server Protocol:

The PDF Slides (including important links) are also available.

Here is the video for the Isabelle/PIDE presentation at Curry Club Augsburg from 14-Jun-2018:

There are some technical challenges: missing screen recording in the first 25min, and occasional changes in the speed of screen recording later on: sometimes the computer screen is ahead of the talk. Nonetheless, this is an opportunity to learn many things about Isabelle/PIDE, how it is done, why it is done like that.